Hello Mike, nice of you to take some time off for us. We have a lot of questions.

1. Can you introduce us to all the members of the team who work on the new project? Who is working on what?

We once had a category "employees" on our homepage. Since we are about to launch a new webpage, I would like to postpone the detailed answer to that question until the site goes online. Rest assured, it will include some of the very first Piranhas.

2. What is a typical working day in the studio? Can you tell us something about its layout or structure?

The little feature "One day at the Piranhas" we made for your forum gave some very good insights of the daily chaos we work in. I think, we are going to offer some more of those insights in future. 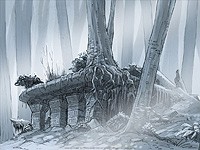 3. Did you reorganise important parts of the workflow? I mean, did you make changes to quality assurance?

We concentrate on finishing important game systems first (e.g. combat system). Even the more ambitious innovations (e.g. more elaborate riddles or traps) now get completed in an early stage of development. Because of those "prototyping phases" development takes a little longer, but it raises the overall quality of the game considerably. For instance, the combat system is practically completed and a very pleasing product of all our former experiences in this field. All the friends of tactical fights will love it.

4. How far have you come with the nameless project? Can you tell us the current state of development?

Like I said, there is the combat system and in addition we made good progress with the gamesworld. The surface world is already completely accessible with cities, farms, caves and so on. Of course, not all of the textures and objects have been included yet, but you already get a pretty good idea how the gamesworld will look like. In character creation we made a jump ahead, I think. This time, we are going to take extra time for monster creations. The design phase for monsters is set until end of January and we will bounce on and off ideas until we find some very unique creatures which make sense in the game's environment.

5. You conceded there have been some mistakes in developing Gothic 3. One reason stated for the number of initial bugs in G3 was: the various teams involved worked separately for too long until they put together their combined efforts. How is it different now?

While planning for the new project we took great care to insure that some particular systems are operational at an early stage. Thus we make sure not to work on too many systems simultaneously but rather finish one before we proceed to the next. This approach increased our teamplay and overall cohesion. 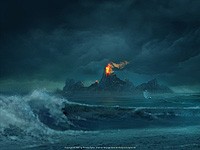 6. Next question regards your storywriting. Many Gothic fans complained there wasn't really a compelling plot one could follow in Gothic 3. How do you make sure it's different this time? Do you have a storywriter? Perhaps even a wordsmith?

We've got not just one, we've got four storywriters. But none of them wrote a book before.

I don't think it's important anyway. Noone was complaining about the plot in Gothic 1 and we haven't had a professional writer back then. What I consider more important is: when we started we wanted to set up a very detailed and plausible game world. That's why we voted against a "huge" game world (although you can lose your way in our new world as well). The new world is very elaborate and there is so much to do and to discover. I don't think it's important how many square miles a gaming world has but rather the amount of fun you have while playing for hours on end. Returning to already visited places and discovering new things or new events is what we consider more appealing than roaming around a huge game world.

7. Can we expect the "usual suspects" of the Gothic universe again with orcs, goblins, lizards and the like? Or are you gonna try new avenues?

I already made a statement regarding the design of enemy creatures. On a additional note, of course we will have standard creatures like wolves. Over the course of the next months we will certainly present the public the odd monster design. However, most of them will not be revealed in order to hold the suspension as long as possible.

8. The game «The Witcher» made quite an impact on the roleplaying public. The critics praised the plot and the way quests were embedded into the storyline. Will you be able to keep up with «The Witcher"»? Your initial concept with the magical barrier was a stroke of genius. But honestly, the sequels weren't that great with regard to storytelling.

I agree, Gothic 1 had the best story of all the Gothic games. Personally, I also very much liked Gothic 2 (especially in combiantion with the Add-On). However, please keep in mind we had almost 3 years to polish the plot for Gothic 1. Whereas for Gothic 2, we just had four weeks. Regardless, for our new project we took all the time we needed and hopefully created a story with some nice twists and surprising elements.

9. Another question with regard to «The Witcher»: there one follows a story which changes considerably according to decisions made by the player early on in the game. Will you have anything like it?

I didn't have the chance to play «The Witcher» for myself yet but I'm planning to do so over Christmas. Therefore, I cannot tell you anything about its quest structure. But I can tell you this about our project: to replay it will certainly be worth it (see next question too).

10. Are there going to be guilds again? For many players, the ingenious guild structure of Gothic 1 made the difference and was instrumental for establishing the vast community in the first place who's keeping their faith in you over all those years. Will you go on with this in mind?

The RPB will have different factions, who don't have a particular liking to each other and which the player is free to join.

Depending on your decision some quests will turn out differently. In addition, you won't have access (or delayed access) to certain areas when you wear "wrong colours". On the other hand, members of the "right" faction will have access to exclusive missions and dialogues.

11. Can you tell us something about the next sound track? The music in Gothic 3 was simply awe-inspiring and phenomenal. It won widespread acclaim and was showered with awards. What is it this time? Can we get a sample of it already?

Please allow for you to be surprised (after all, it's Christmas time). 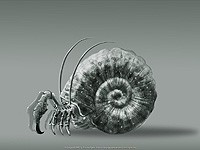 12. A question regarding the graphics engine: is it being developed in-house or do you use third party engines?

Both. Certain systems are purchased but the lion's share is self made. That's the reason why I'd rather not go into detail yet about queries regarding our current state of the project or the programmers involved.

13. Are you happy in your partnership with your new publisher?

So far everything works fine. Early in December, we were able to surprise our publisher with a milestone excelling all expectations. We are quite pleased with it ourselves and start the holiday season with a certain confidence.

14. We heard, RPB is being developed both for the PC and a platform. Sounds like treason for the PC community.

No, it isn't. We had planned for a PC game and we are developing a PC game. Nonetheless, what's wrong with a platform game if done right? However, one shouldn't set out to create a PC and platform game in one go just to maximise profit gains. Therefore, we would have to redo the complete interface for a platform. Nothing is more annoying than a job half done concerning the interface.

16. What's your opinion regarding mobile games? It's being developed for Gothic. Can you imagine anything like it for your still unnamed project?

Well, in theory we can imagine a lot of things but we don't think about it. We focus on our current project.

Talking with Mike Hoge was: meditate (translated by Rashnu)