"What is the purpose behind the sunken huts in Gothic 1?"
"What sets PB's games apart from their other contenders?"
And, indeed, "How important is level design to a game?"

Charismatic and with a sharp sense of humour, Sascha goes through each question, answering thoughtfully in a way that really allows us to peer into the process which has brought us several splendid games. 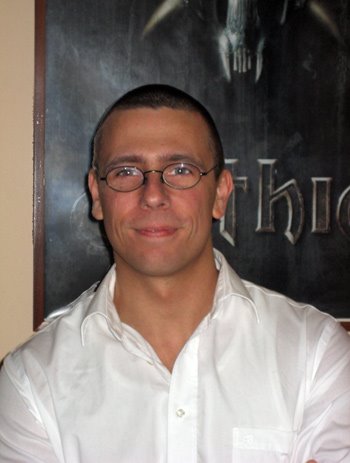 1. Who forms the design team? What's the task of each level designer?

These are all 3D artists, 2D artists and level designers in no specific order:

and a heap of freelancers and outsourcers.

2. Which of them were members starting with G1?

3. Who is responsible for the main design ideas?

Game Design:
Editor's note: Björn always wears his solid silver Sleeper Amulet. One can notice it in the picture on his profile.

4. How creative can you be without falling into conflict with the game designers?

Back in the day there was more room for an artist to come around with his own ideas. Today the amount of work has more than doubled and I rarely have time to create a design by myself. However, from time to time our concepter is too busy with concepting for the character department, and cannot deliver concepts for our department. Then we have to make our own concepts. From time to time there is also an idea you really want to bring forward, then it's mostly no problem for anyone to go for it.
Editors note:
1. Be sure to check out Jann Kerntke's website, PB's concepter.
2. Have a look at Ralfs Developer Diary entry concerning character design

5. What are the steps of creating the landscape?

The story defines where the important locations are, and what surroundings are needed. Then Mike draws a schematic view of the world.
He will then hand it over to Andre Thiel who creates the heightmap level mesh in the level editor. Meanwhile, the nature objects and trees are created. When the heightmaps are done, the objects will be placed.
We're using heightmaps for the first time in our games.

6. What are the steps in creating a building?

You get a concept, then you model it. While modeling you create textures and apply them.

So easy, so straightforward.
Editor's note: Don't forget to take a look at Mario's Developer Diary entry concerning the houses in Gothic 3.

7. What are the inspiration sources (both real life and fiction) you use for the games?

1. Our own story of the current game.
2. All you have seen before in your entire life...
3. Other games and films.
4. TEH INTERNETS for references!!!

8. The PBs are known for their great level design. What is the secret to a non-generic landscape? What's your explanation behind the success of PB's level design, which outmatches even larger studios like BioWare or Bethesda?

It's like this: every plant is handbred inside a hallowed chamber. Then, in a ritual, it will be inserted. A level designer then takes the plant to its foreseen place and sticks it into the ground. When the plant is placed, he will sing for it. Additionally, we tend to constantly place too much outdoor vegetation, which can easily generate performance problems... Which is also something that the big developers won't ever do

9. Risen had a lot of tunnels and interconnected dungeons. What problems did this raise compared to your previous games?

Sometimes we really had to have an eye on intersections of level polygons, especially the small undead altar location; the dungeons under the volcano also needed special attention. So sometimes the spaces between a dungeon and the outer levelmesh are only a few cm

10. Which of the games you have worked on is your favorite? Why? Which models you consider to be your top accomplishments?

It's Gothic 3 for me. I like Gothic 3 because of its huge, variety-filled world. Since I love exploring and great visuals, I didn't miss any story stuff in there. Also, this game was a huge step for us, changing from the original and limited Gothic engine to something more powerful and next-gen.
Concerning single models, I really have no favorites. A model always stands inside a huge context of other things, and it is the whole thing that makes a scene look good.
Editor's note: Don't forget to take a look at Sascha's Developer Diary entry concerning the dunes in Gothic 3.

11. Do you have favourites or a speciality you're exceptionally good at? Like, making mountains? Or forests?

Sure, I think I am good at modeling and texturing whole 3D environments, which is ultimatively my job description

But besides that, I can be quite a decent lecturer, I think. Well, or so my students say.

12. What can you tell us about certain elements from Gothic 1? For example, the sunken huts at the bottom of the New Camp lake, or the Abandoned Mine? Concerning the latter, did you have a model ready for it?

Sure, I still have all the models for Gothic 1 in an archive. And concerning the huts, there was no special reason for them.
As far as I remember, I placed a few things in Gothic 1 that had absolutely no use

13. Why the transition into larger game worlds? What do you hope to achieve in creating a wider gameplay area?

Sometimes things cannot be stopped, even if you want them to stop.

14. What do you think level design should represent in a game? Should it take precedence over other areas?

Everything has to be in a reasonable balance. Cool gameplay in a "coder graphics" environment won't ever be a top seller and might even decrease the gameplay value, so stunning or creative visuals are a must in today's games.
For me, I am kind of a simple gamer. Give me a great looking environment with cool lighting and overwhelming visuals, add some enemies to shoot at and put some nice scripted events in there, and you got me.
Though... Mass Effect is also cool... There you can make decisions if you didn't know yet...

15. Your games are known for their intricacy in level design, and a high degree of uniqueness. Can the same be said about Risen 2?

That should be judged by the audience.

16. In Risen 1, you modeled everything manually. Did you do the same with Risen 2? Or did you automatize the landscape generation more (like using heightmaps etc.)?

Yes, we're now using heightmaps, which are faster to create and handle. The payoff is a less unique landscape which you have to spice up with large rock objects.

17. I imagine it can be frustrating to place each tree manually. On the other hand, placing entire groups of trees with one click often leads to generic looking landscapess -- even if the "tree brush" is randomised. Where and how do you find the best compromise between effective work and unique design?

In gothic 3 I pre-produced 50x50 meter pieces of forest "object patches" where all objects like trees, mushrooms and stones were placed. These could then be placed over the landscape. Since the objects in these patches aligned on the ground when put in, this was the ideal placement method. These patches could also be rotated, and since the topology of the terrain always changed, there was nearly no repetition noticable.

In Risen 2, however, I was not involved in placing the objects. Andre Thiel and Minh Duong did that for most of the outside nature stuff. They went more for the approach of placing every single plant by hand.

18. How do you work? Top-down, wherein you first make the large, vast landscape, then sculpt the individual areas, delving deeper into details? Or bottom-up, where you start in one single spot then build everything up from there?

When the level heightmap is painted, the 3D modelers make all the assets. Then the level designer places the objects, and the lights will be set. Not much magic here

At the very end of production you have a small timeframe to make some detail enhancements.

19. What presets are available to you, and what do you make of them? Can you perhaps give a small (imaginary) example?

We don't have any presets in our engine for anything. We have to create everyting from scratch.

20. What are the limitations under which you have to work? I assume there's poly count and the accessibility of the terrain. Anything else?

The most important is memory. The consoles only have a low amount of memory, and in order to have an easy time porting the game to consoles we also have an eye on our resources for the PC version. Memory is very critical. Then there are some door sizes, step heights, table heights and other measurements that are also essential.


And now some questions specifically about Risen 2:

21. Will the world be interactive? Not in the classic sense of item use, but deformation physics and such: impacts of cannonballs upon the terrain or trees, etc.

There won't be any breaking trees or destructable landscapes. We are a small team and don't have the resources to implement such eyecandy. These features won't improve our gameplay that much.

22. Which are the tools or technologies you have used for the first time (if there are any) with Risen 2?

We used a new animation system, "Morpheme", and the already mentioned Heightmap tool, which is now implemented in our editor.
Editor's note:
1. Some details about Morpheme in an article
2. Euphoria by NaturalMotion: Could give some insight into the technologies behind Morpheme.

23. Which are the biggest improvements we can expect in R2?

24. How did the community influence your work until now, and how did we influence Risen 2?

I think the most valuable feedback is about gameplay issues and general glitches, stuff that simply makes the game better. Feedback concerning the graphics mostly has limited potential to be taken into account.

25. Any final comments or hints for the community?

Thanks for supporting us and playing our games! We need you and we love to hear from you!


We hope this interview has achieved its purpose. There are always new things to learn about the people who have succeeded in creating some of the most important and well-received RPGs of the twenty-first century.

The questions were composed by: Maladiq, Faby, Foobar.
Written and proofed by Faby
Edited by Maladiq